Once, whilst living in a very comfortable house and no doubt under the influence of chocolate, I said to Rob that I would be very happy just living with him in a shed!! Never in my wildest dreams did I think this would ever be a possibility.... However........
We decided to renovate our little cottage in Westbury by simply knocking down a few walls and extending the kitchen and living area.

The plans were drawn and approved and we thought that we could live at the other end of the house whilst the work was done. The builder started in with the 'jimmy bar' and sledge hammer and we soon discovered that most of the bearers were non-existant and that not much was actually structurally sound. When the remains of the cottage started to lean we decided that, despite loving the little place, it was best if it was all pulled down and we started from scratch.Maybe you can see where this is leading but I did not 'see the writing on the wall'. So one cold, rainy muddy weekend we packed up the household and with our neighbour's help we moved into the shed. 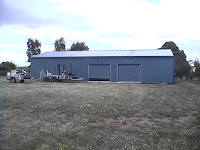 It is a big shed but it was packed to the rafters with a household full of furniture, a bus and a car.The cats went balistic and spent their time lost within all the boxes. The dogs (Chester and Sasha) just put up with things - they still had our bed to sleep on! 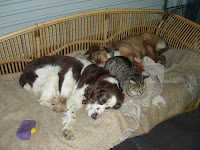 I did almost go nuts during the 'shed period'. Rain and hail poured in through the roof cap and at night to keep warm I would sit with blankets covering me, next to the patio heater, with my gardening hat on to protect my face from burning!! We actually had family willing to visit and stay with us! Kerry, Barry and Ted were very brave.

During this time we also lost our beautiful dog Sasha. She had been with me for 12 years and one morning I woke up and she was gone. 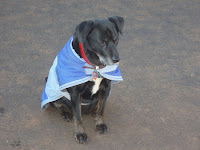 We never did find her and nobody had any idea of what may have happened to her. Very sad!
After several months of greiving I decided that I would like another dog. I started a campaign to slowly convince Rob that Rusty, a dog I spotted on the RSPCA website, was meant for us. 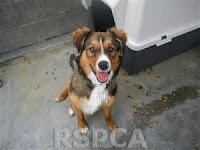 In the RSPCA photo Rusty looks like a real terror but just so adorable and intelligent. Chester and I went to collect him and we were deemed suitable. Rob was not convinced and threatened more than once that Rusty had to go back. Rusty was a lunatic!! He was like a child full of red cordial and suffering ADD - he bounced off the walls! Of course he eventually settled down and has become our much loved boy.
The new house was completed in April 2006 and it was absolutely fabulous to move in and get settled. We looked forward to setting up the gardens and making the house our home.
Posted by Elizabeth at 5:34 PM