We had lived in Emerald for just over 2 years when we went to Tassie for a holiday. We motorhomed all over that island and fell in love with the place. My ancestors are Tasmanian and Rob longed for the cooler weather like that of England (where he was born) and the Wollondilly area of NSW (where he grew up) - so the decision was made to move to Tassie. Luckily Rob could commute back to central Qld.

We found a lovely old cottage in the village of Westbury - just 30kms west of Launceston.

The actual move to Tassie was a real adventure as we had 2 dogs, 4 cats, 4 chooks and 2 budgies and us. Rob ripped the seats out of our Toyota Cruiser (named Brittney) and in went all the various animals in cages! A bit like Noah's Ark. We travelled via the inland route from Emerald to Sydney, stopping at Roma, Toowoomba and 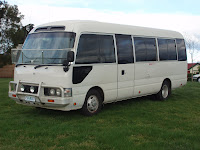 Goondiwindi. Our last night was spent at La Perouse where the locals were stunned at the sight of chooks and cats and us bedraggled nomads. We then sailed from Sydney to Devonport on the beautiful Spirit of Tasmania.
So late September 2004 had us all settled in Westbury dreaming of gardening and being self-sufficient - a real 'sea change'. By 2005 the first flush of visitors had been and gone and the rennovations began!!